Does Homeowners Insurance Cover Termite Damage? The Answer Might Bug You 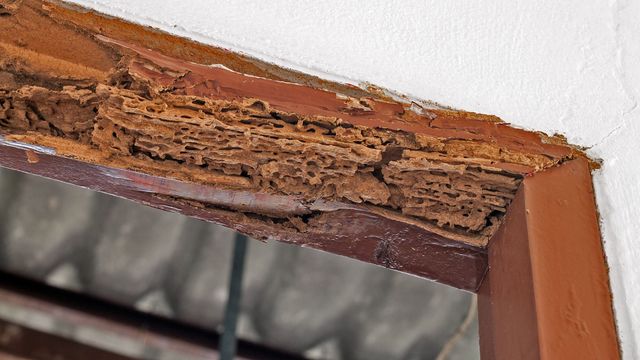 Termites eat 24/7, and if they’re in your walls or foundation, your home is basically the insects’ all-you-can-eat buffet. Of course, there’s no such thing as a free lunch—that banquet comes at a major cost to homeowners. According to the entomology department at the University of Kentucky, termites cause billions of dollars in damage a year. The worst part is, you usually don’t know they’re eating your home until it’s too late, leaving you to wonder—does homeowners insurance cover termite damage? (Spoiler alert: You won’t like the answer.)

All insurance companies consider the harm done by termites to be avoidable. How so? Through regular inspection and routine maintenance of a property. In fact, some insurance companies have policies that specifically mention the exclusion of termite damage!

The one possible exception is something called “collateral damage.” If a support beam fails due to termites, and part of your ceiling caves in as a result, your policy will likely cover the repair of the ceiling. Replacing the beam, however, will be on your dime. Got it?

What does homeowners insurance cover?

It may be frustrating to pay for homeowners insurance, only to find that you’re not covered for certain relatively prevalent types of damage. Keep in mind that homeowners insurance policies generally cover unexpected or accidental situations, like damage from a hailstorm. Damage that happens over time—like that rotten beam from a termite infestation—is almost never covered.

Can you get homeowners insurance for termite damage?

There are several insurance companies that issue separate policies to cover damage from “wood-destroying insects,” which include termites. These home-hungry bugs include carpenter ants and various beetles.

The cost depends on where you live. Most termites set up residence in California. The good news for Alaskans is that their state purportedly has zero termites! Since each homeowner’s situation is different, depending on the needs of the owner and the property itself, the best way to determine what extra insurance you may need is to talk to your insurance agent.

Another alternative to extra insurance is something called a termite bond. You pay an annual fee—usually $500 to $2,000—to a professional pest control service, which regularly inspects and treats your property. If it misses something, it will cover the resulting damage.

How to reduce your risk of termite damage

If you don’t want to hire an outside pest control company, you can still thwart an insect infestation with routine home maintenance and inspections. When it comes to termite damage, homeowners should be on the lookout for buckling wood, swollen or cracked floors and ceilings, and water-damaged areas, says Joe Vahey, vice president and product manager at Erie Insurance.

When it comes to pest infestations, especially ones that can affect the foundation of your house, it’s always better to be safe than sorry, so it’s smart to make inspections part of your regular maintenance routine.

This entry was posted in Homebuyers, Real Estate News, tips for homebuyers, Tips for homeowners. Bookmark the permalink.