Bay Area’s most beautiful homes of 2017

These abodes made us gasp, swoon, and sigh

This year proved an excellent time for sellers; not so much for buyers, who faced catapulting prices with not nearly enough vertical growth options. The annual income needed to buy in SF soared $10,000 in six months alone, climbing from $161,000 in May to $171,000 in November. Ouch.

But on the bright side, hey, at least the Bay Area is still home to some of the best architecture in the country.

This list, inspired by our sister site Curbed Philly, runs the gamut from Queen Anne Victorians and midcentury-modern designs (going above and beyond the Eichler-sphere) to a red Spanish-Med and a Sunset stunner.

Alas, only two—two!—contemporary constructions made the list. One in Woodside, the other in Carmel. (Be bolder next year, San Francisco!) No matter. This was a tough list to narrow down, and it’s hard to top many of the classic homes that landed on the market over the last 12 months.

And now, in no particular order, here are the 25 homes that made us stop and say, “Whoa.” 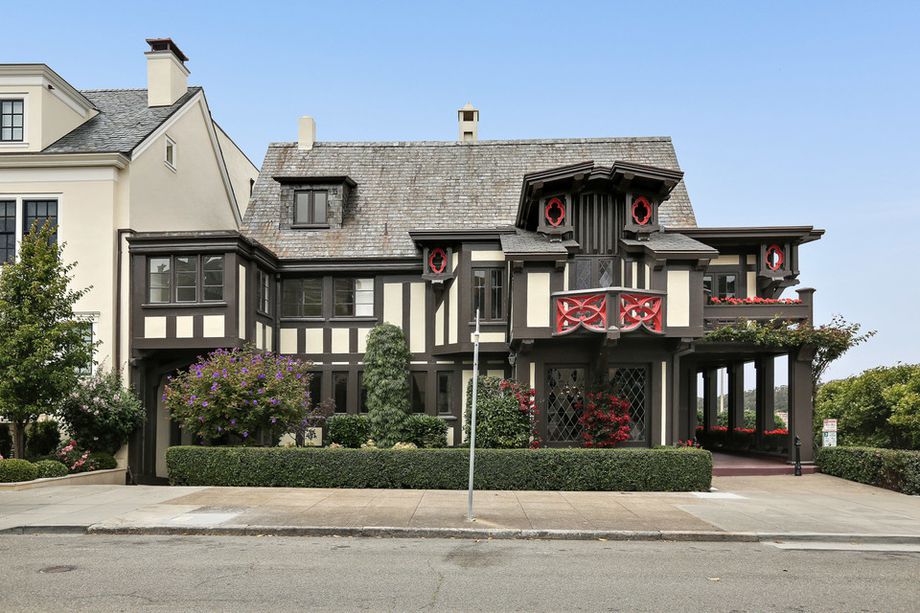 The Roos House, designed by Bernard Maybeck (Palace of Fine Arts), wowed us when it landed on the market for a cool $16.5 million in July. Built in 1909 for clothing magnate Leon Roos, the half-timbered design featured redwood battens and moldings, as well as Gothic touches, which can still be seen in the wall coverings, light fixtures, and even the crest of the owner’s initials ornamenting the entrance door. A sale is currently pending. 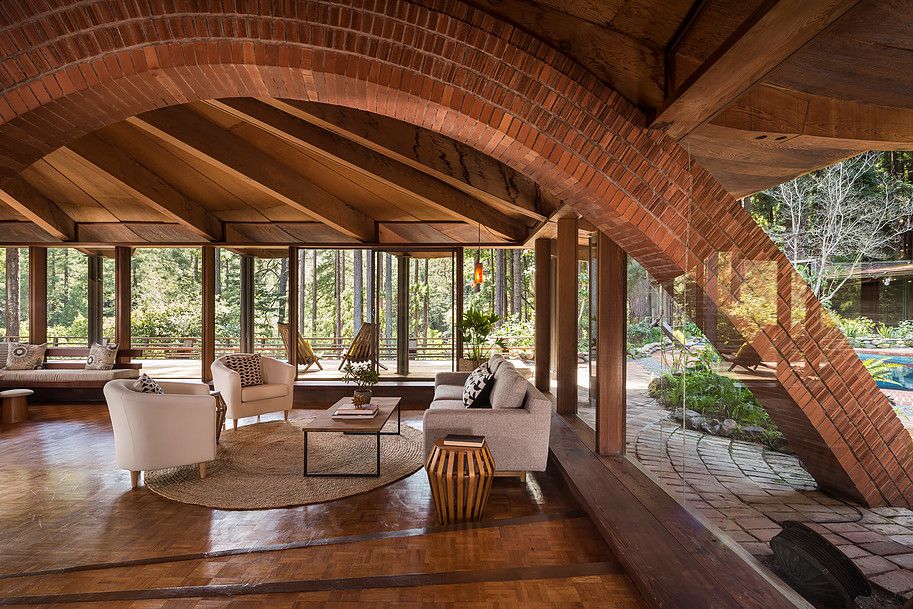 The iconoclastic architect, educated under the tutelage of Frank Lloyd Wright, built this home in 1962. The specimen set itself apart from other midcentury designs via bold use of brick arches, which flow continuously in and out of the house. Other highlights included the use of glass and old-growth redwood trees, which make up structure’s exposed beams and wood work. Asking $2.7 million, it sold in April for $2.8 million. 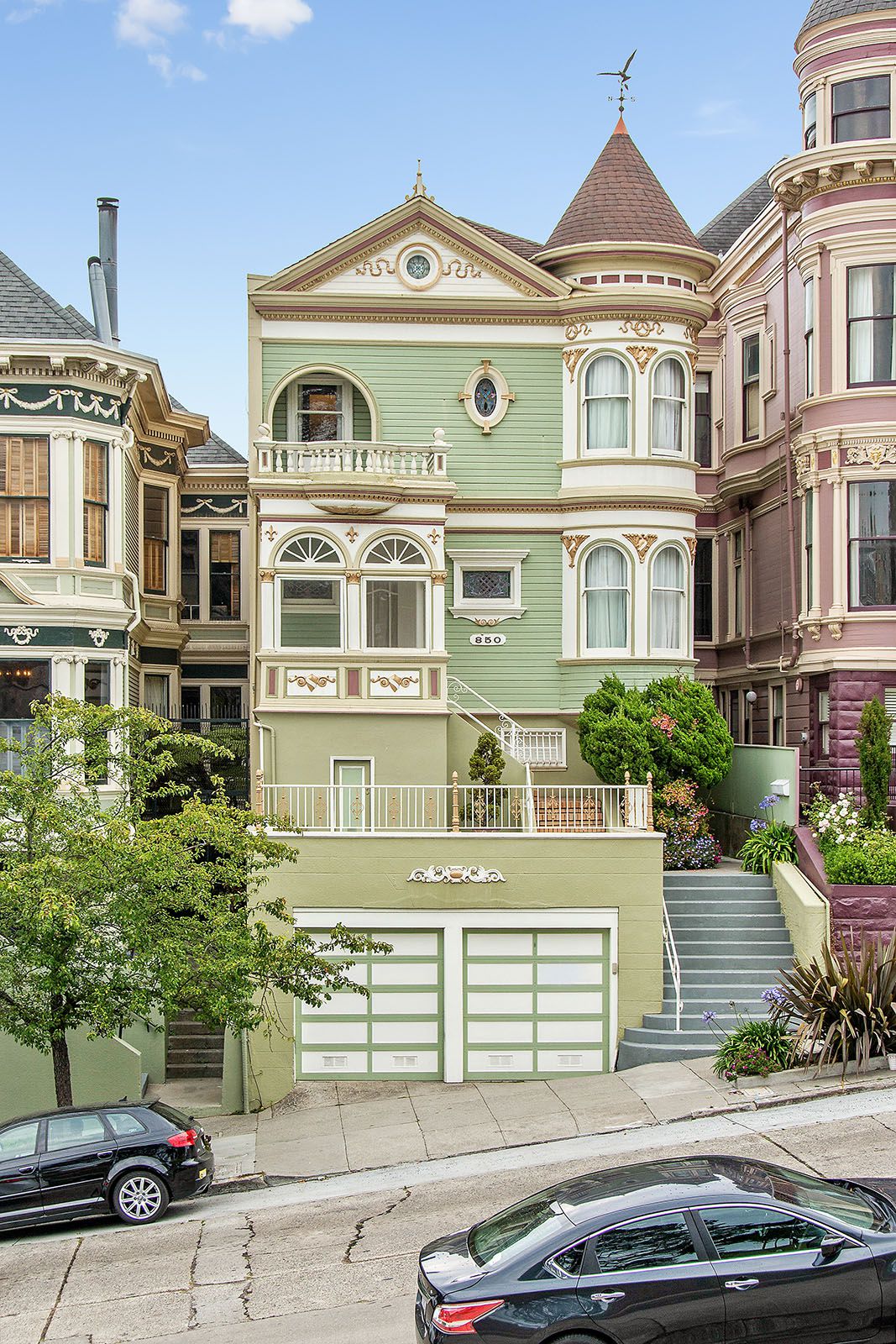 One of several Queen Annes on this list, this Alamo Square example caught our eye with its sea green facade and intricate accents. While the updated interiors left a bit to be desired—“Who painted bannisters on stairs white?” bemoaned one reader—the standout exterior made this home one of our favorites. Asking $5.6 million in August, it has since pruned its price to $4,995,000. 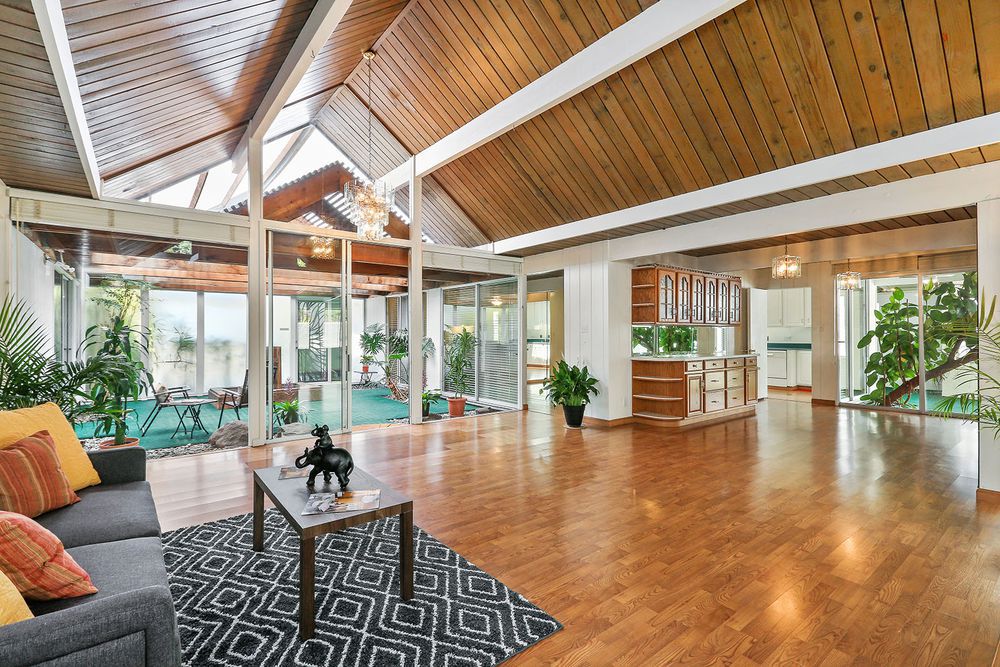 Although Eichler overload set in this year—especially with a glut of the noted developer’s work in Palo Alto—a refreshing double-A frame in Oakland managed to drop our jaws with its spacious atrium, exposed beams, vaulted ceilings, and carefully updated interiors. (Admittedly, the new den was a bit too on the nose.) Coming in at four beds, two baths, and 2,421 square feet, this 1965 home landed on the market in August for $1,050,000. It sold for said amount two months later. 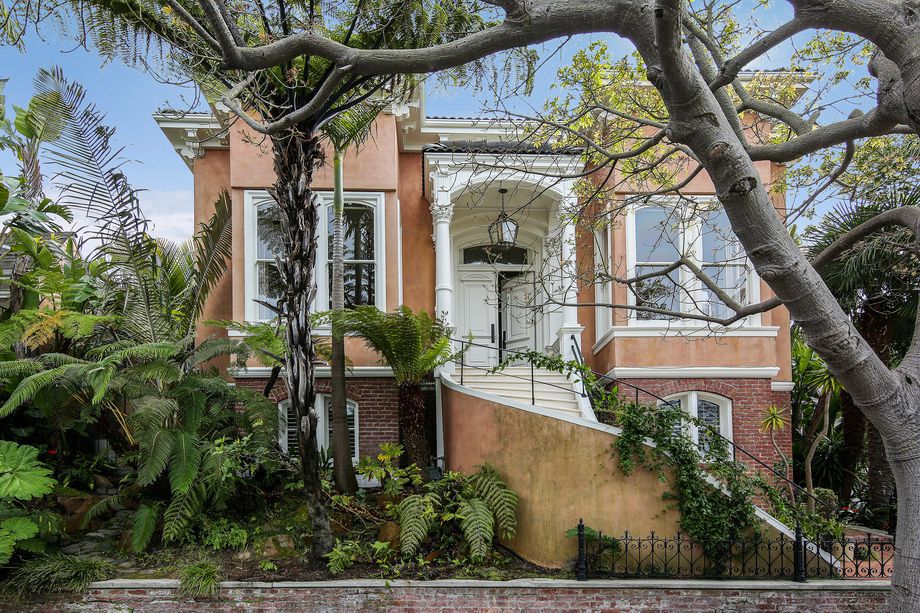 We only daydreamed about what lurked inside this elegant yet eerie Vic in Potrero Hill, but we never imaged we’d find this: a onetime dairy farmer’s home turned into a party pad in the 1980s. Italian designer Larry Masnada (decorator to such star wattage as Mel Brooks, Diane Sawyer and Frank Sinatra) took over the house in 1985 and transformed it into the gem we see today. It remains on the market for $3,495,000. 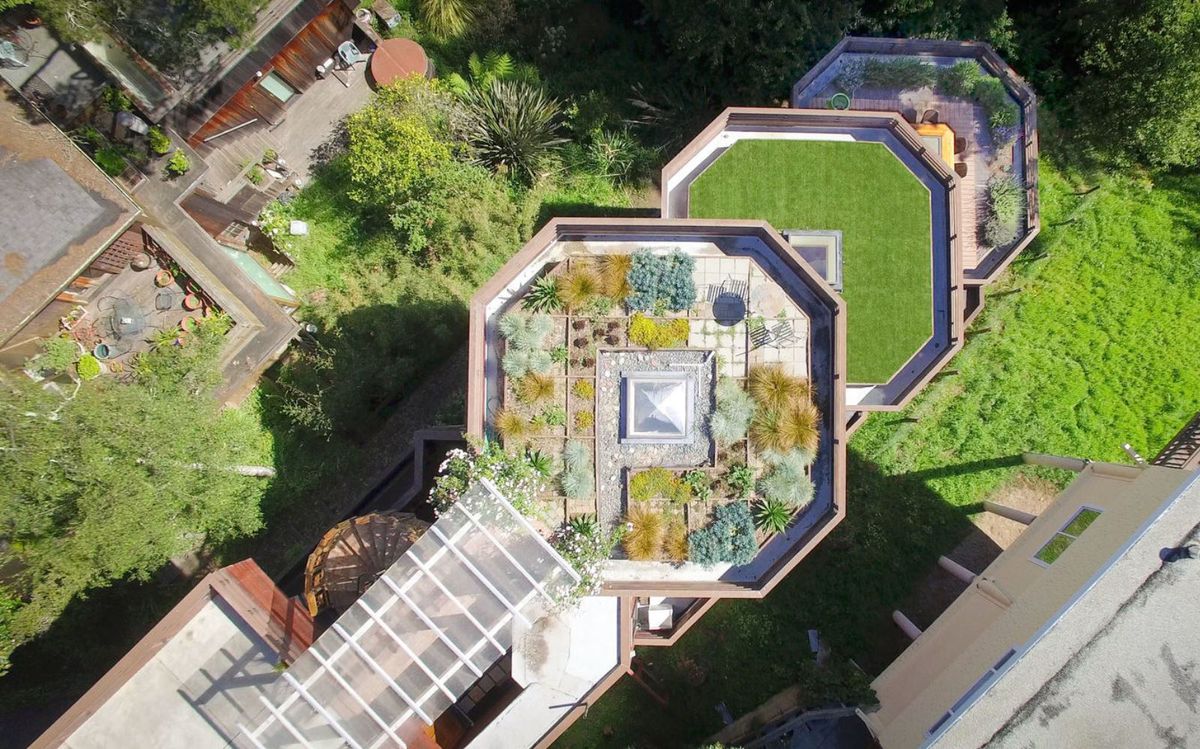 Forget what you’ve heard: It’s what’s on the outside that counts. Take, for example, architect Bill Cullen’s tri-level home in Mill Valley, which he called “a testament to geometry.” One look and you’ll see why; the multi-octagonal shapes, manicured and landscaped to perfection, make up the look and feel of this hillside home. Sure, the interiors could use some work, but from high above, this house is heaven. 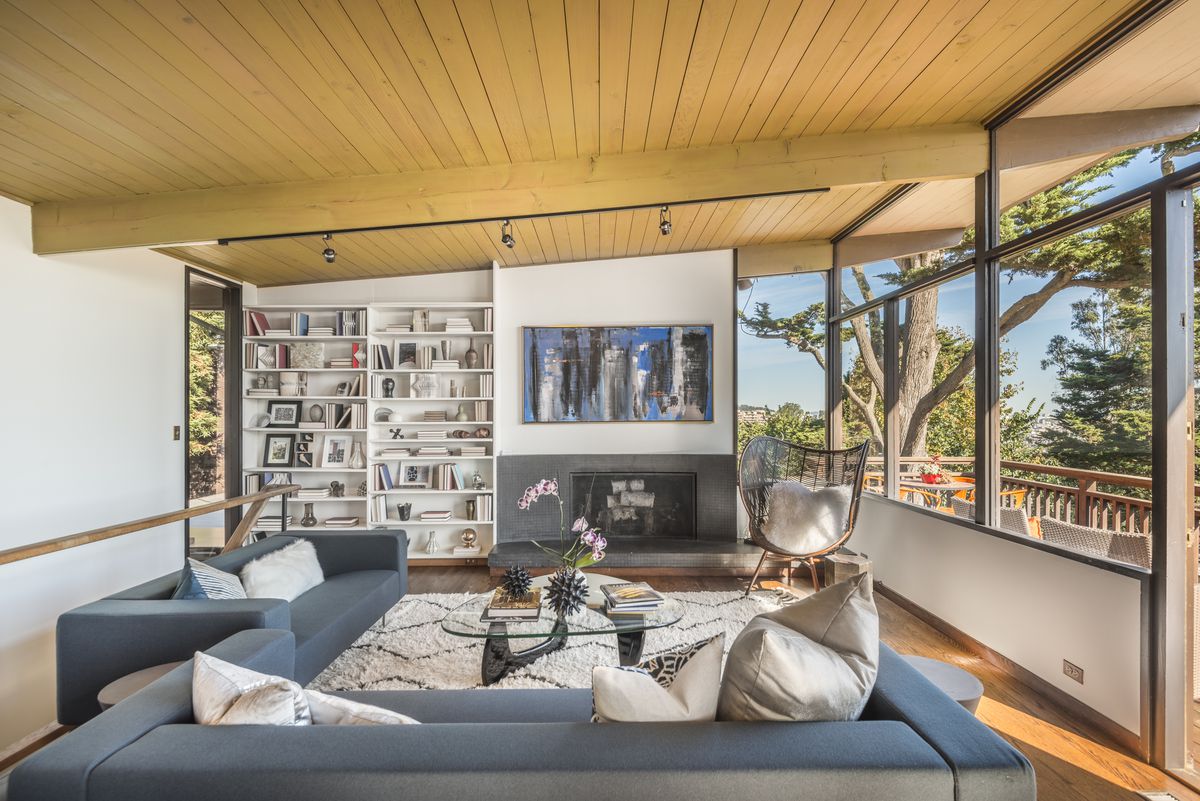 Midcentury-modern overload set in this year. So much so that a term was coined for a new modern strain. But one look at this circa-1957 gem made it seem fresh and exciting all over again. Featuring three beds, two and a half baths, and roughly 2,040 square feet, this Glen Park stunner hit the market for $1.6 million. It sold well over asking for $2,600,000. 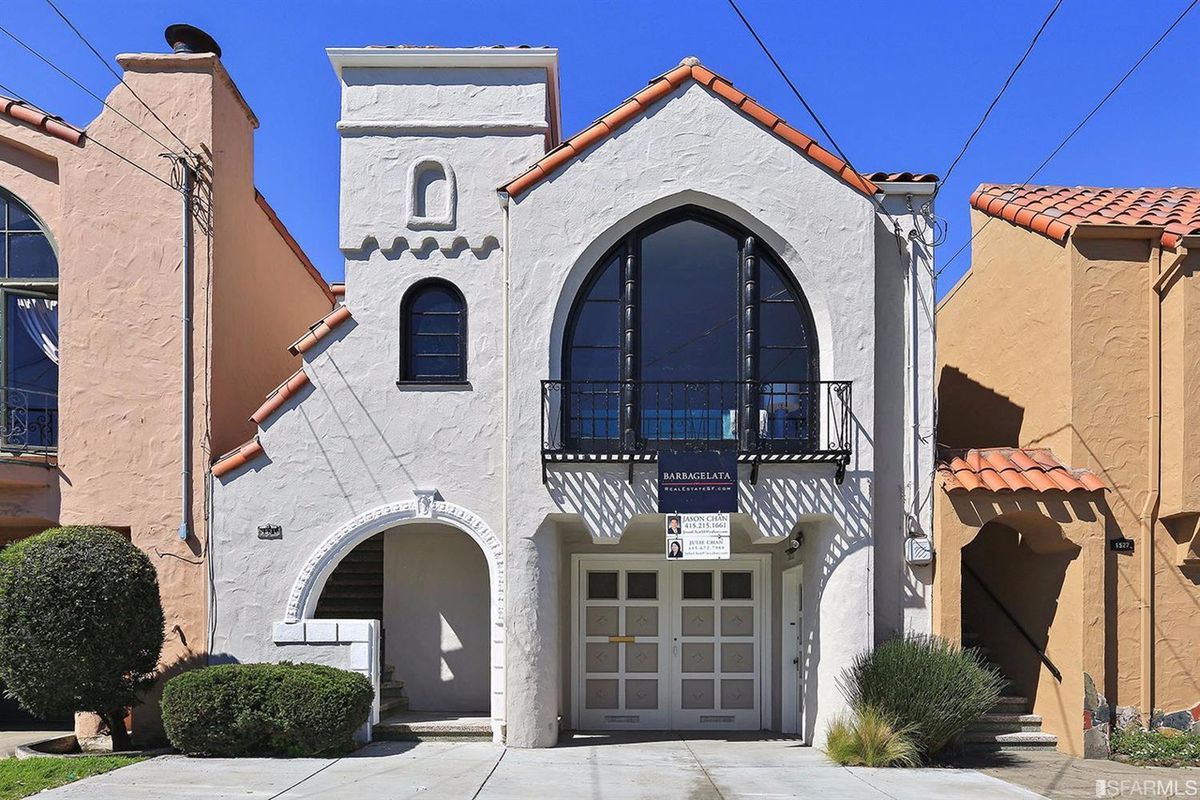 Next to Presidio Heights stunners and Silicon Valley mansions, this cozy dwelling was a real worker among workers, nestled among other likeminded, humble homes. Which is why, in part, we fell hard for this Sunset District gem. From the arched doorways to the parquet hardwood floors, this three-bed, two-bath house is the kind of property many people should be able to buy. Alas: Hitting the market in April for $995,000, it sold in a week’s time for $1,550,000. 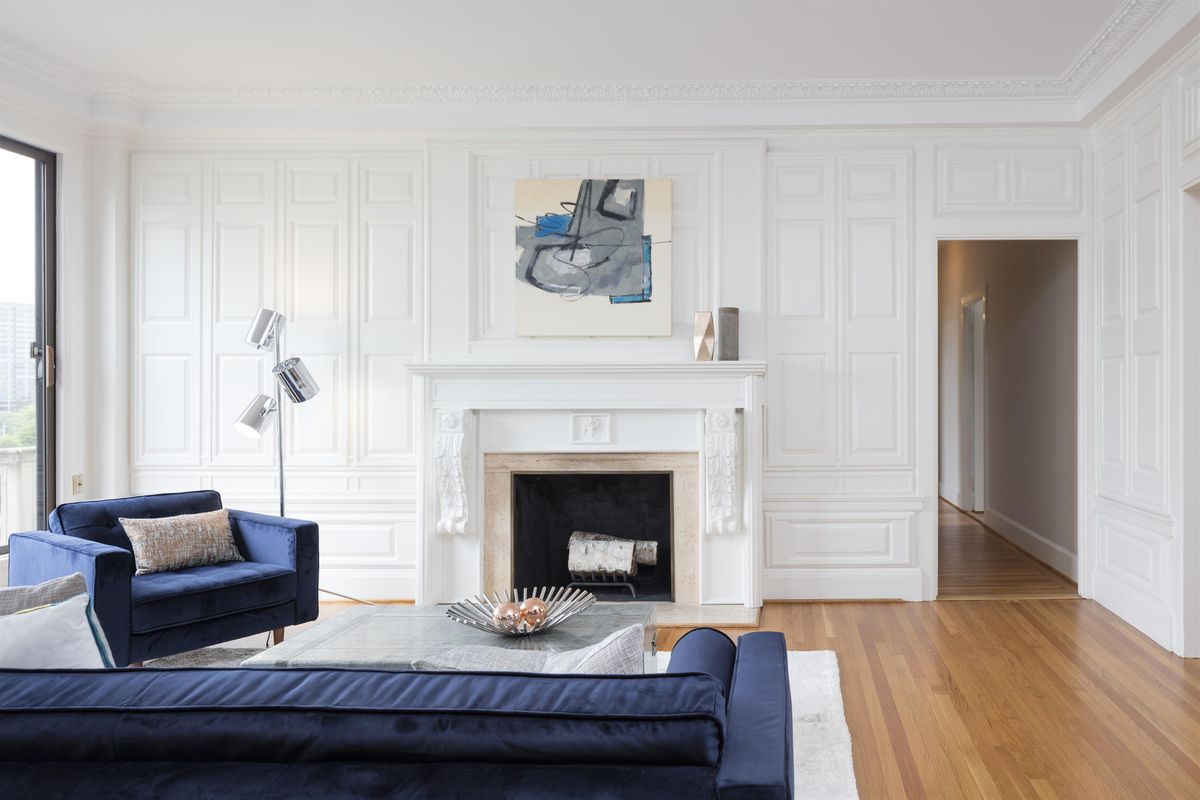 The Beaux-Arts building near Lake Merritt is just one reason why Oakland runs a tight race with San Francisco when it comes to residential architecture. This top-floor pad inside the Willis C. Lowe-designed building boasted an English wood-burning fireplace, picture wall panels, egg-and-dart crown molding, and more. Asking $1.19 million in May, it sold for $1,318,000. Peering out among the hordes of Victorians and Edwardians in Cole Valley, this dark modern beauty shot us right in the heart. Originally built in 1924, the entire house was reconceived from the floor up in 1969 by architect/owner Paul A Wilson. Highlights included a boxy wood exterior hiding a bright white interior with an open-floor plan (predating the current bumper crop of antiseptic homes with similar layouts). Offering $2.75 million in April, it sold for a gasp-inducing $4,000,000 in less than a month. 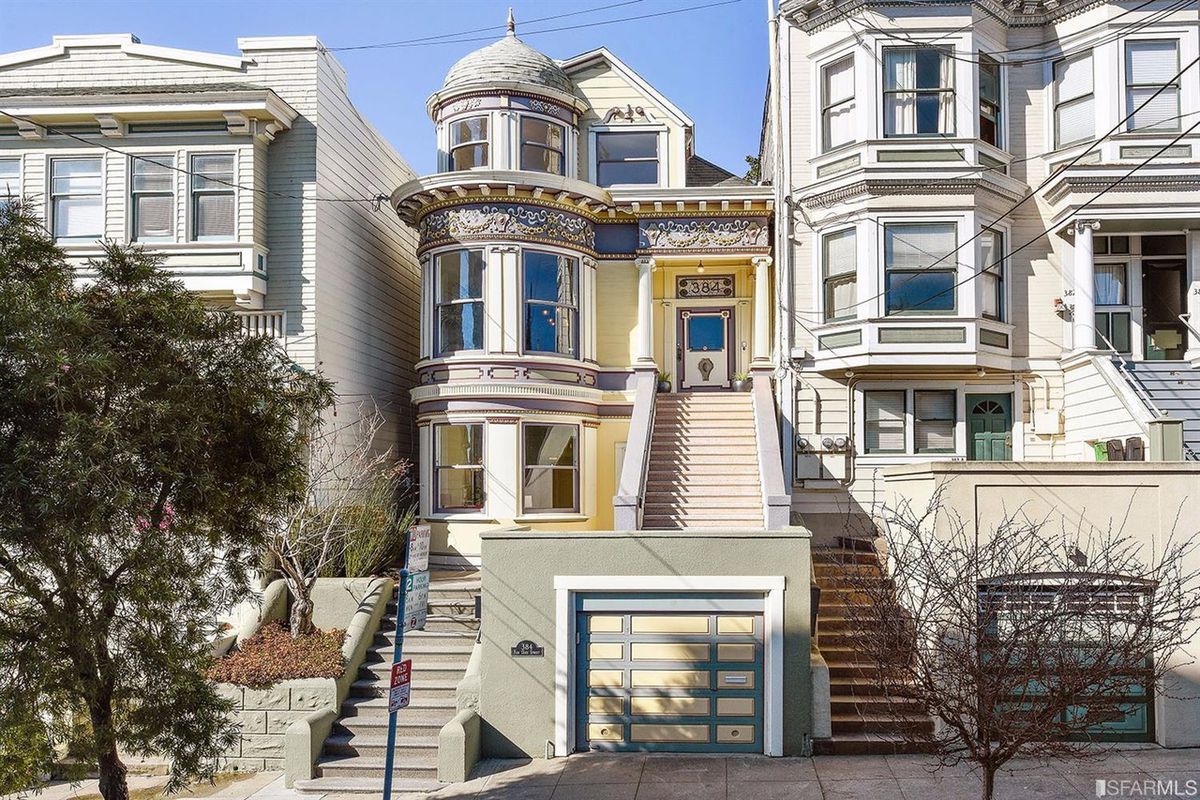 Terror struck after glancing at this circa-1890 Queen Anne. What with San Franciscans’ history of ruining classic structures with mindless, homogenous renovations, we feared this Noe Valley specimen would follow suit. Perish the thought! Shortly after this home sold, the owners contacted Curbed SF to let us know that, mercifully, they plan on keep it as-is. Phew! 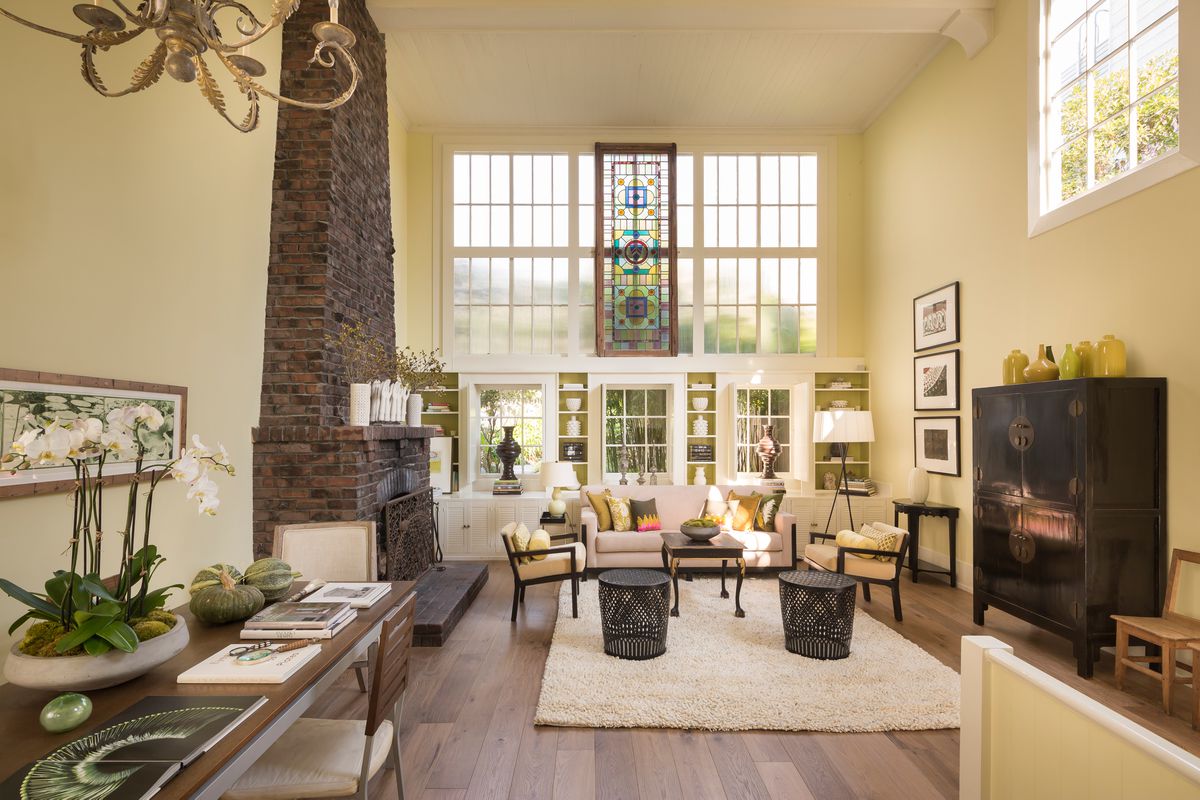 Tucked away from busy Turk Street sat this charming beauty—a detached home tucked away from the street behind a row of hedges. The three-bed, two-and-a-half bath abode included a double-volume living room with 17.5-foot ceilings, an oversized brick fireplace, and windows on all four sides to allow for maximum natural light. 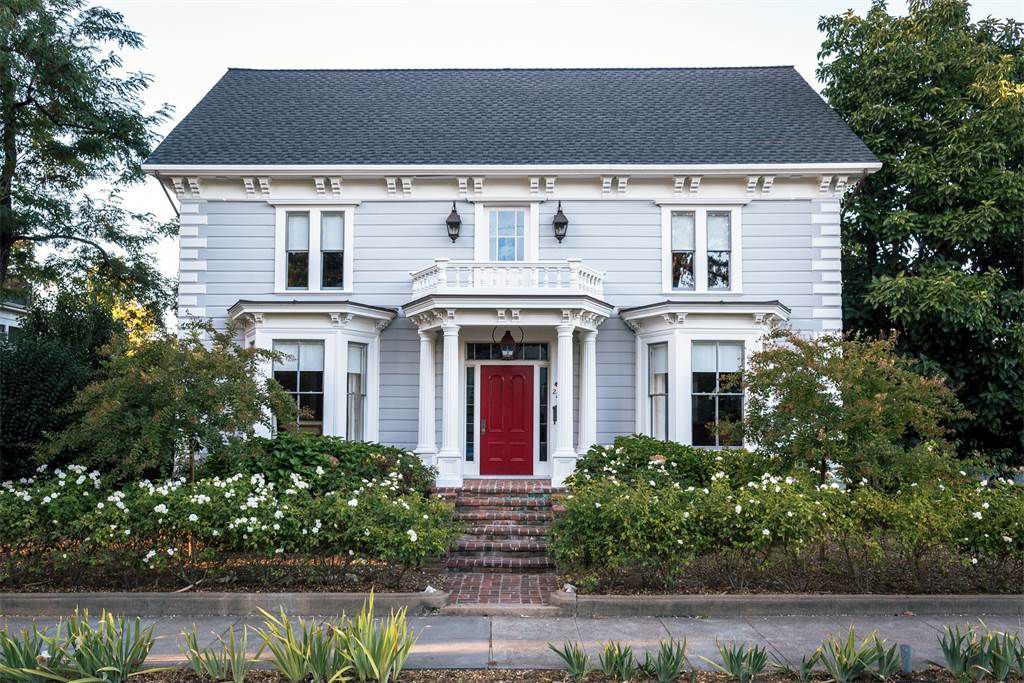 Built in 1871 for a local blacksmith, this Italianate Victorian in Healdsburg fell into major disrepair before being brought back to life by Mark Goff and Phillip Engel, a business analyst and graphic designer turned renovation experts. We loved the home so much that it was featured in our Renovation Diary series. It remains on the market for $5.4 million. 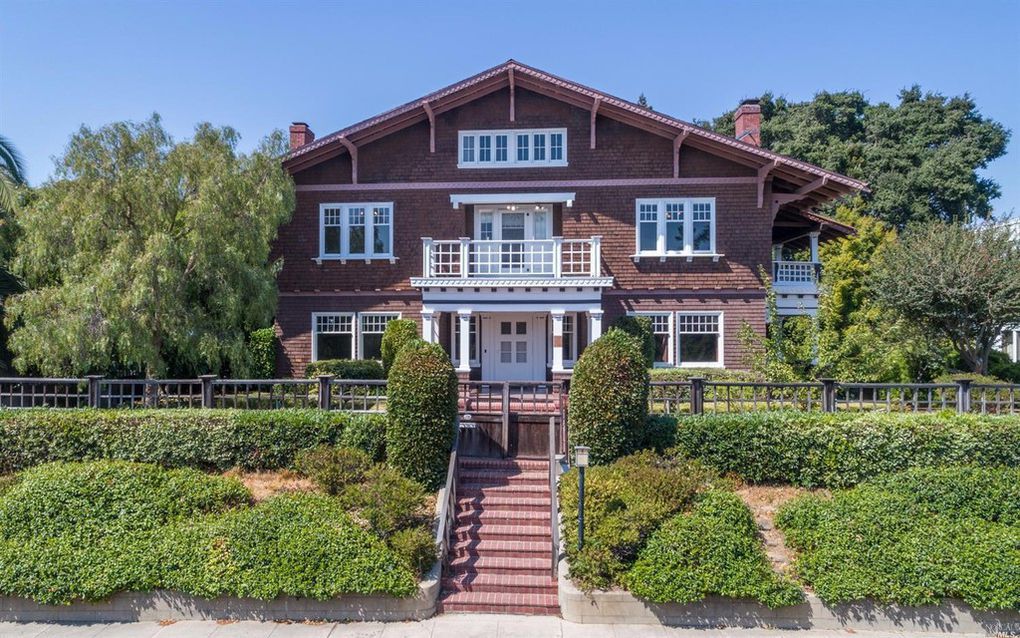 Swiss Chalet meets neoclassical Beaux-Arts, this Julia Morgan home, built in 1909 for banker George Wilson, stunned us with its low-gabled roof, its hanging eaves, and a front porch staircase that turns every daily excursion into a grand exit. Asking $979,000 in August, it sold for in October for $965,000. 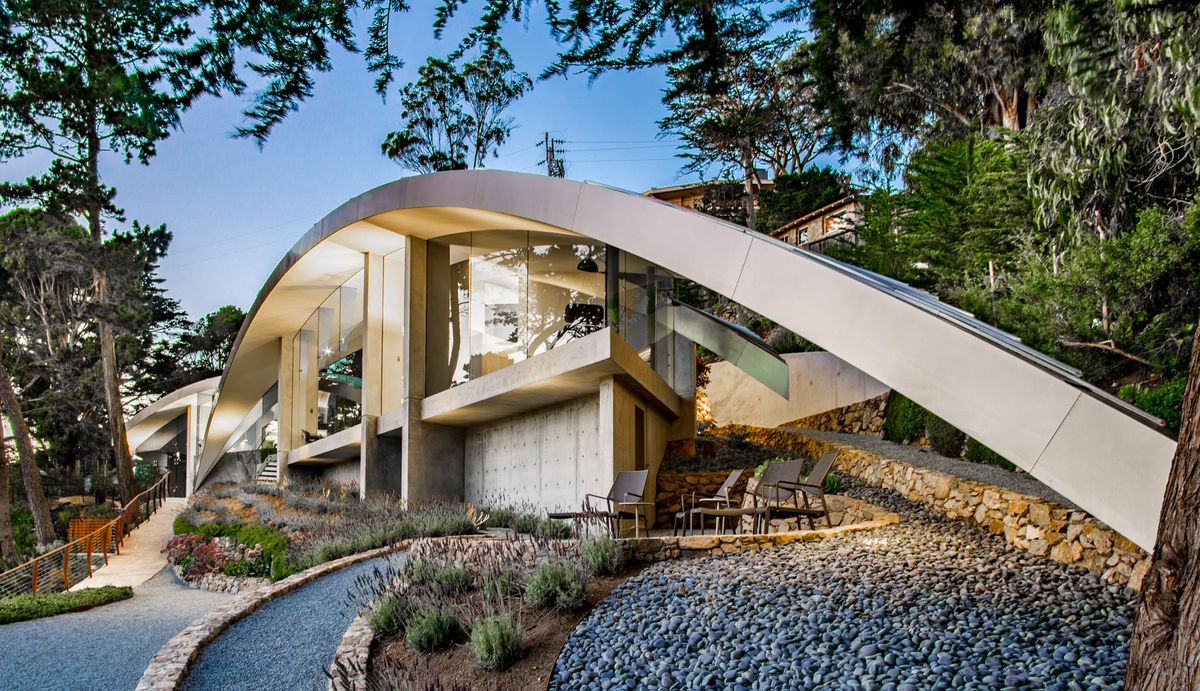 Heartbreaking. That’s what this Wallace Cunningham-designed home did to us this year by being so far away (in Carmel along Highway 1), so expensive ($11.4 million), and so very much everything we wanted. And then some. The rainbow-like arcs and enfilade design connecting one space to another make excellent use of concrete, glass, and metal. In a word, glorious. 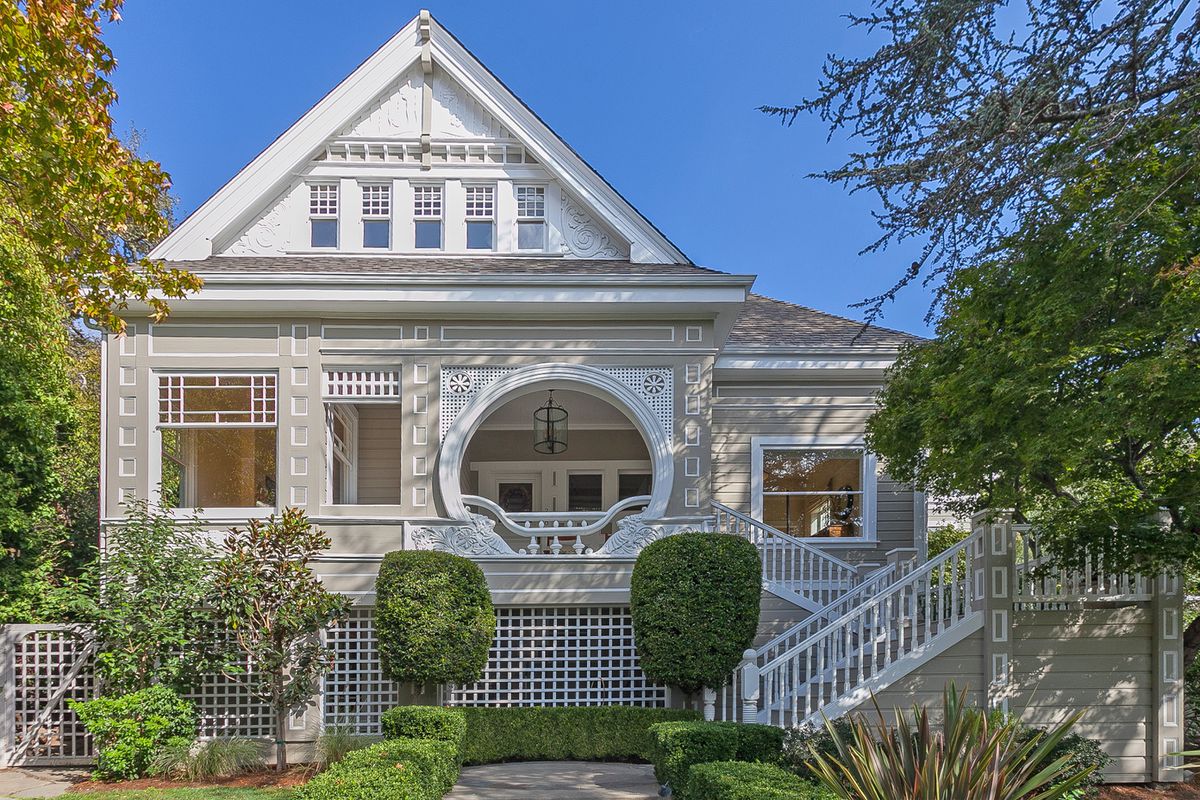 16. But of course, another Queen Anne, this one in San Rafael

Ah yes, another Queen Anne to break our hearts, this time using the siren song of spindlework and incised ornament. While a few readers ballyhooed the contemporary interiors, the exteriors kept us swooning. But the main focal point—the veranda with a rounded moon gate—is what really had us crushing hard. It’s asking $4.2 million. 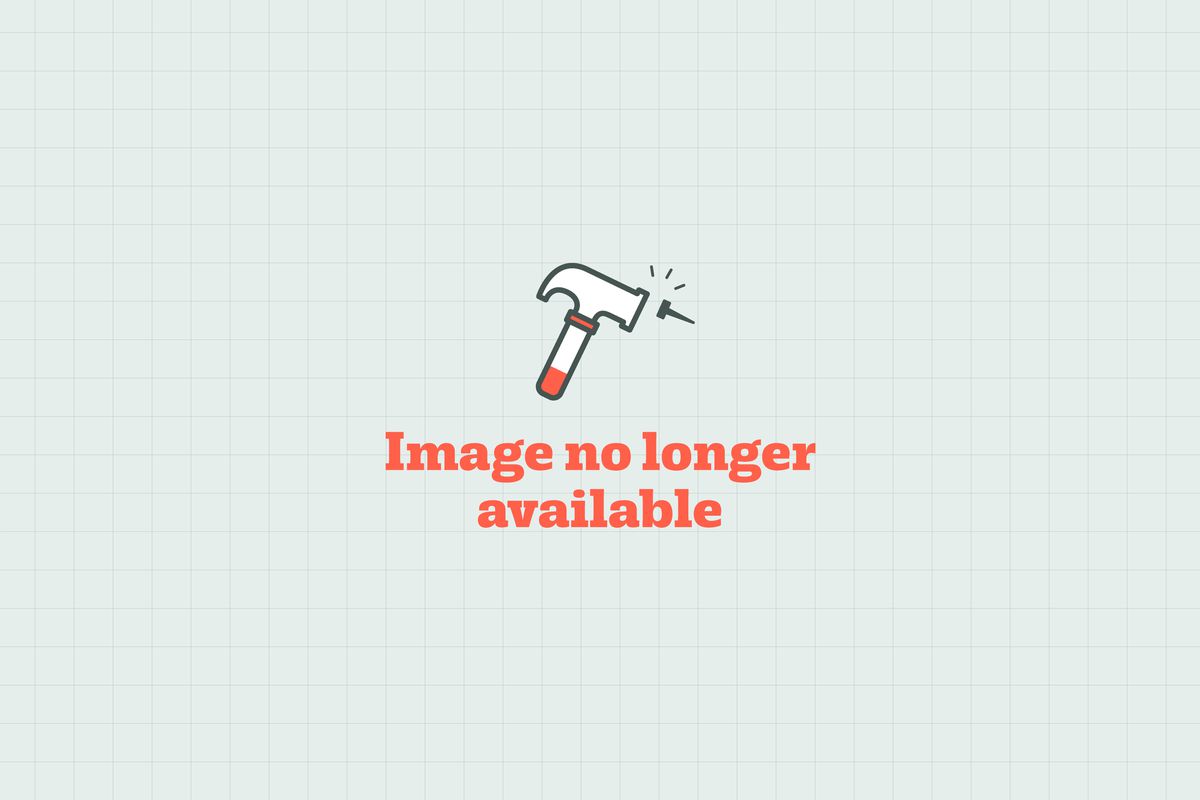 Readers were taken aback and appalled by this unabashed display postmodernism. So, naturally, we found this Woodside home downright brilliant. The sprawling circa-2000 home, built by Memphis design group founder Ettore Sottsass is comprised of six pavilions with terraces, connected by a single glass atrium. Contrasting with the contemporary decor was a working equestrian center complete with stables, tack room, and birthing shed. Landing on the market for $14.9 million, it now sits on the market at the reduced price of $13,500,000. 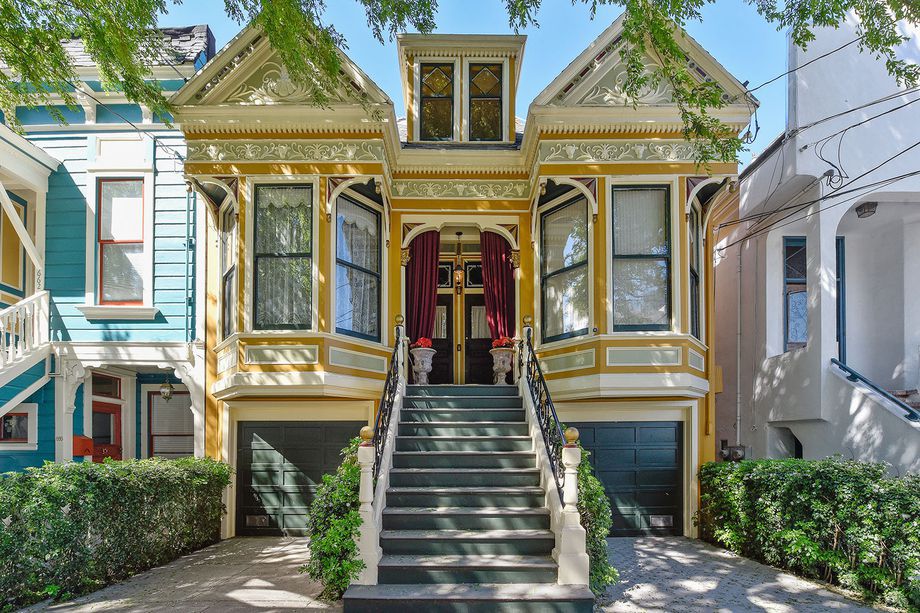 This is the Victorian we see when we close our eyes, when we dream at night, when we plead to the heavens above for more. Sigh. Few homes this year were as unanimously praised as this Noe Valley beauty. The former owner of the Eastlake Victorian “sisters” was an architect-slash-Victoriana buff who resurrected the space to its original splendor in the 1970s. The print wallpaper, the woodwork, the stained glass, the conservatory—each room a souped-up DeLorean to another era. Asking $2,900,000 in April, it sold for $2,500,000. 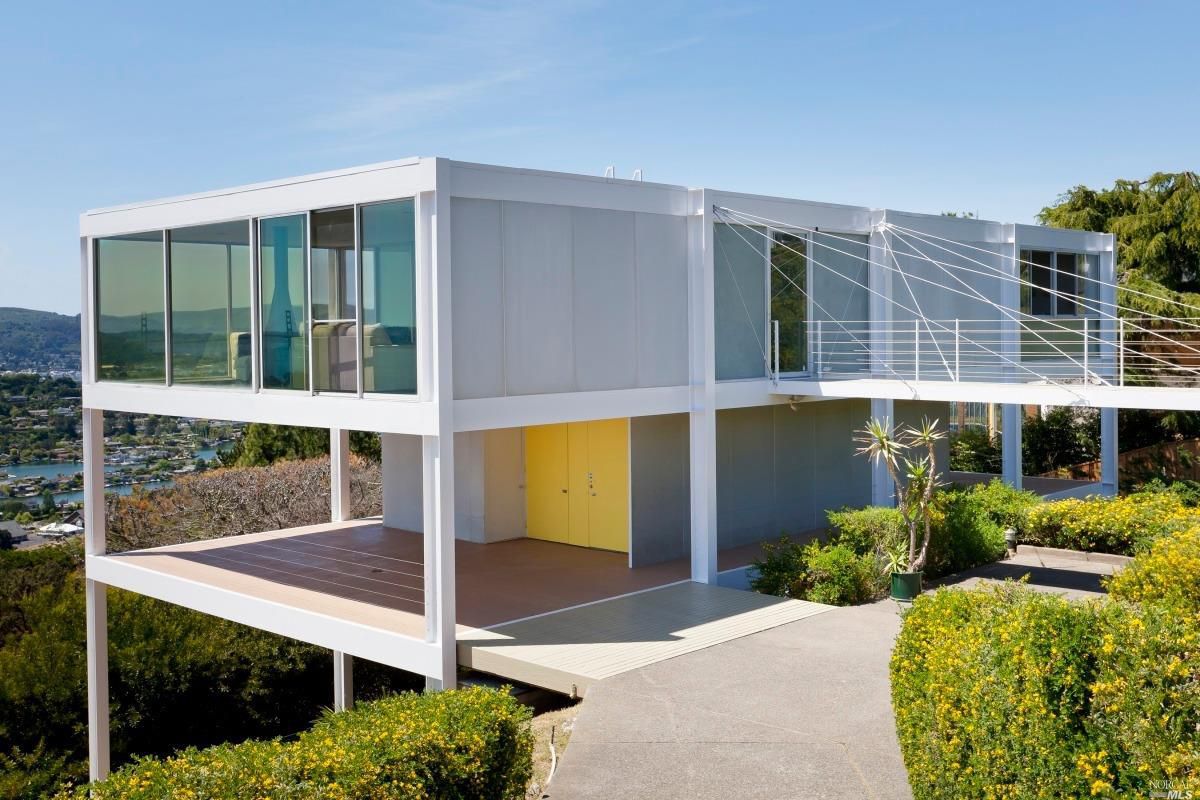 We came for the faux suspension bridge look on the elevated walkway. We stayed for the banks of glass walls that open up a good portion of the facade. Featuring three-bed and two-and-a-half-bath, this 1961 North Bay abode landed on the market for $3.58 million. It sold over asking for $4,000,000. 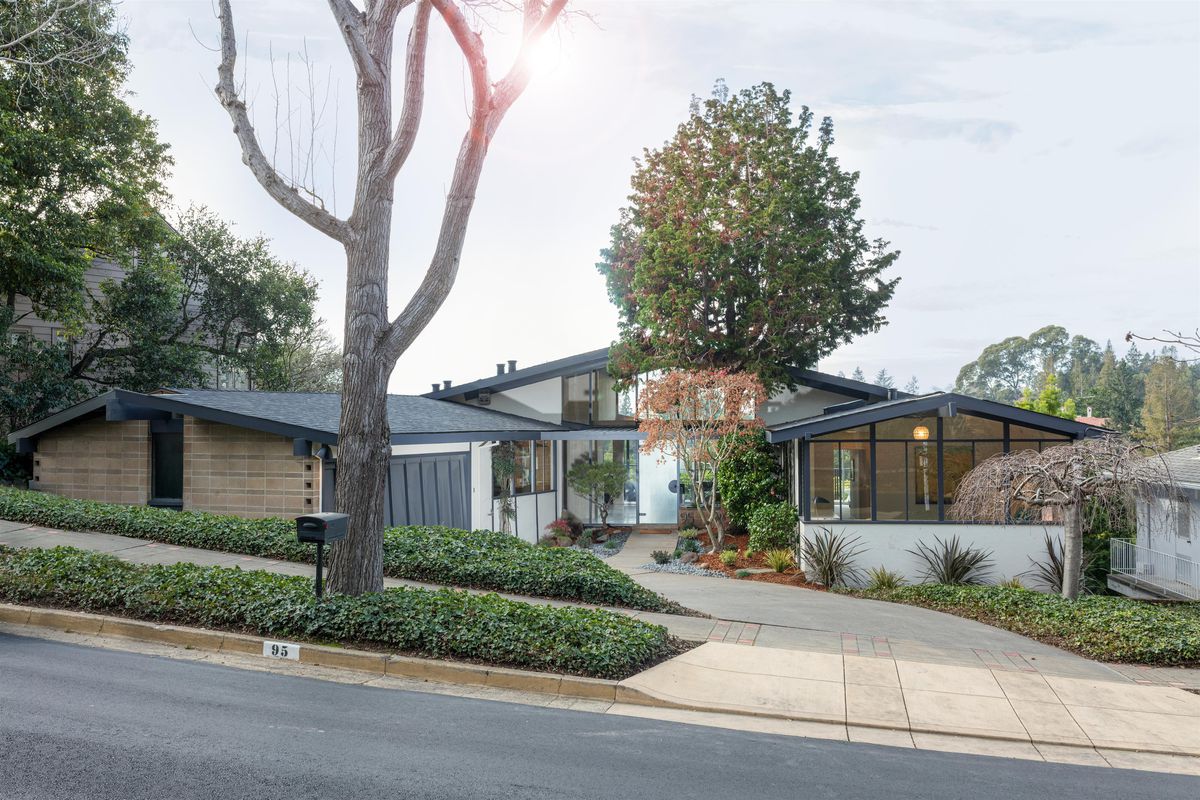 Simple and clean, this understated Piedmont property wowed us with signature tall glass walls, skylights, wraparound deck, and vaulted ceilings. Best of all, it showed how a midcentury renovation can be done, and done right. Asking is $1,895,000.

Heart went aflutter after setting sights on the Angela Danadjieva home in Tiburon, billed by the architect as “a symphony of light and space.” Highlights included 36-foot-tall ceilings, an indoor waterfall, and massive walls of glass. “I designed it like a park, everything of natural materials,” said Danadjieva. It sold for $4,400,000. 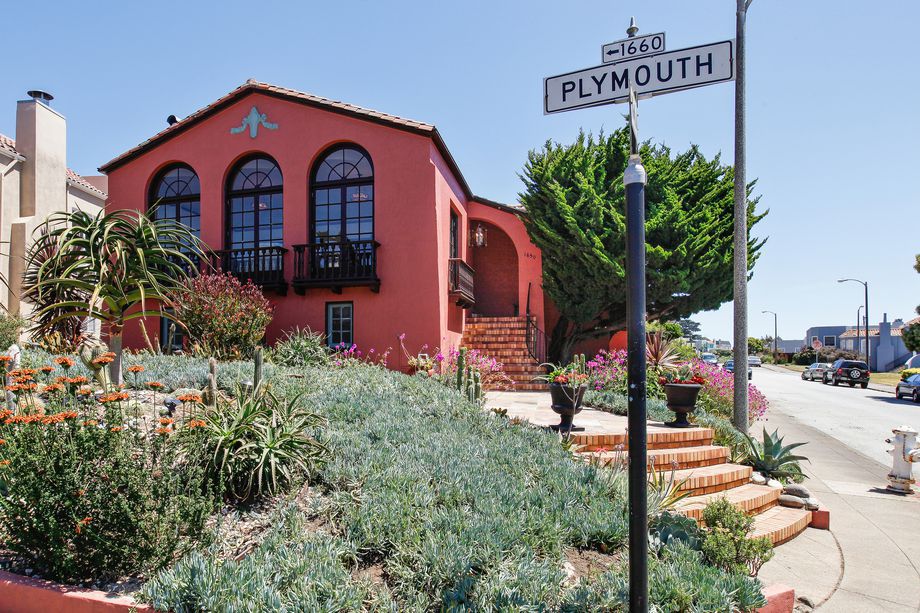 Beautiful inside and out, this 1920s home, boasting a dusty red facade, delighted us with a xeriscaped yard with drought-tolerant plants, succulents, and specimen cacti. Asking $1,595,000 in June, it sold for $1,780,000. 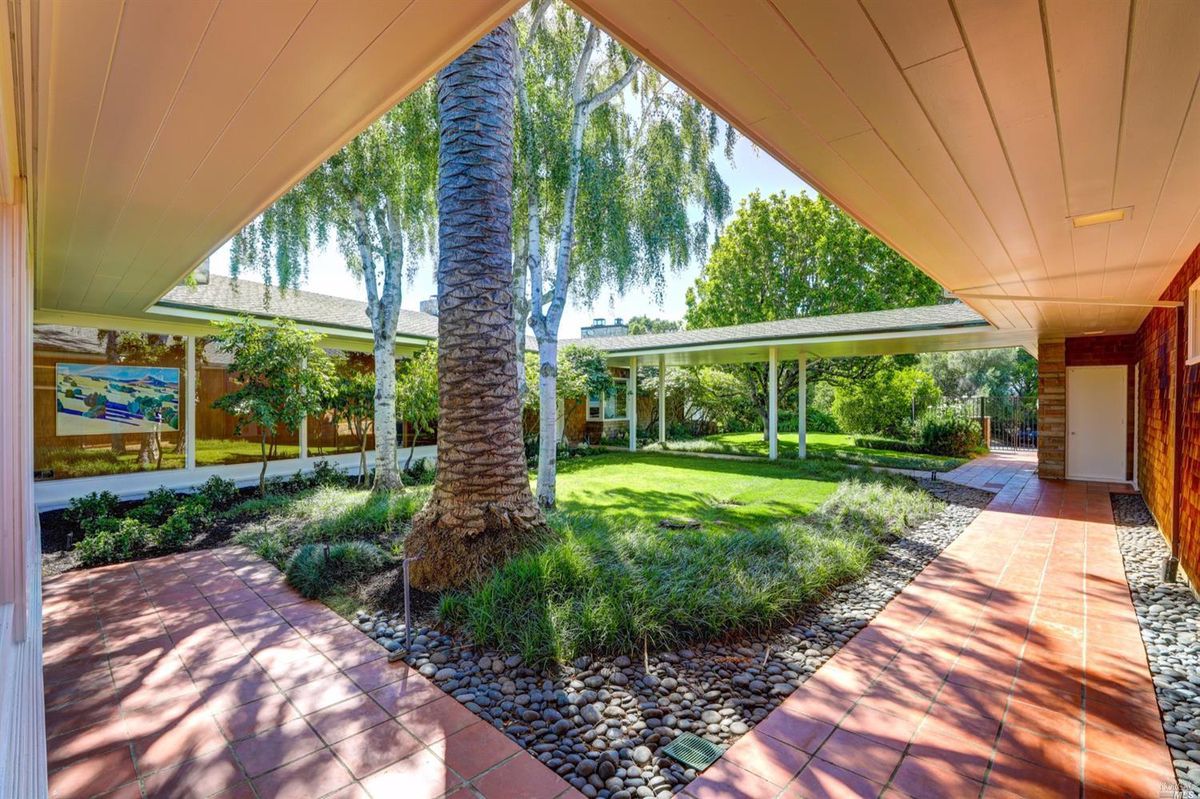 It’s hard to ignore how many midcentury homes landed on our 2017 list. And this Clarence Mayhew specimen, built in 1949, helped kick off the midcentury-modern trend by being one of the look’s first examples. And what an example it is! Of special note: the dining room’s engraved bas relief created by Ed Quigley. Asking $4.9 million in June, it sold over asking for $5,777,777. Lucky, indeed. 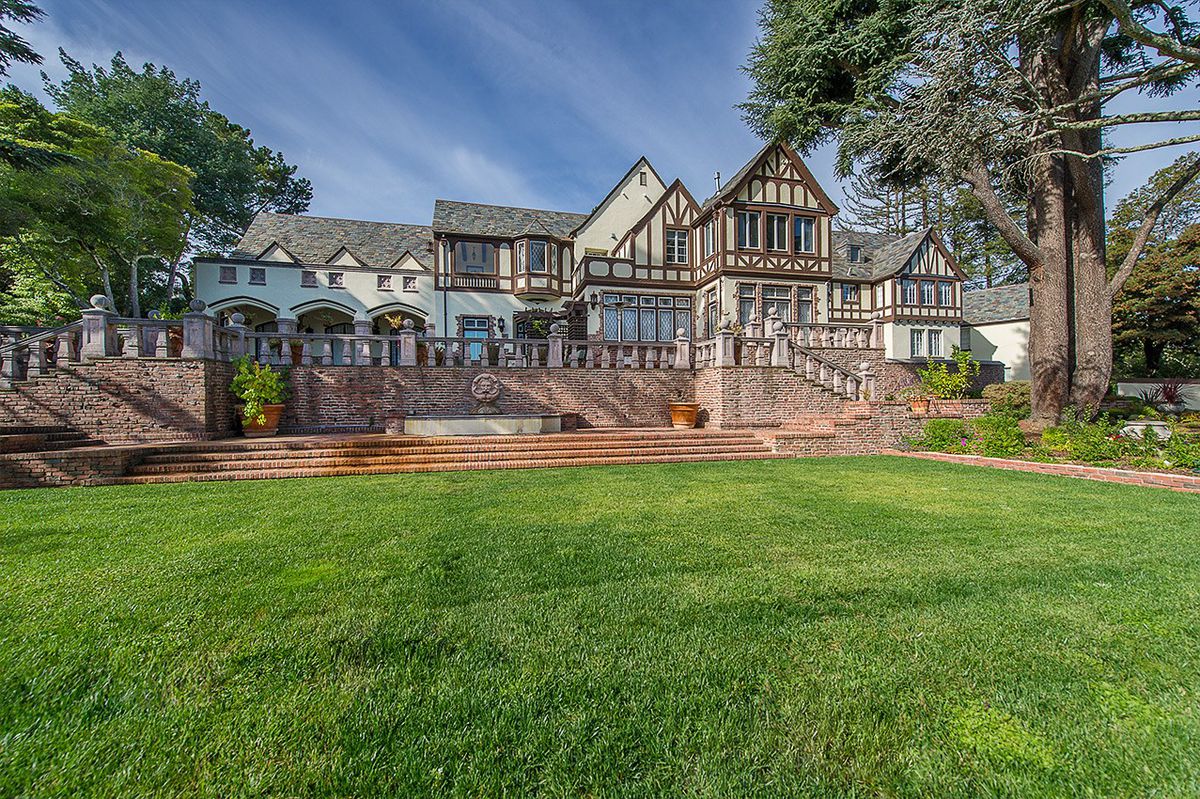 Minimalists, avert your eyes! This sprawling Peninsula home dazzled us with its unabashed intricate woodwork, stained glass, coffered ceiling, and vaulted ceilings fit for a cathedral. This 1930s home was simply too much—and we wouldn’t want it any other way. It remains on the market for $14.5 million. 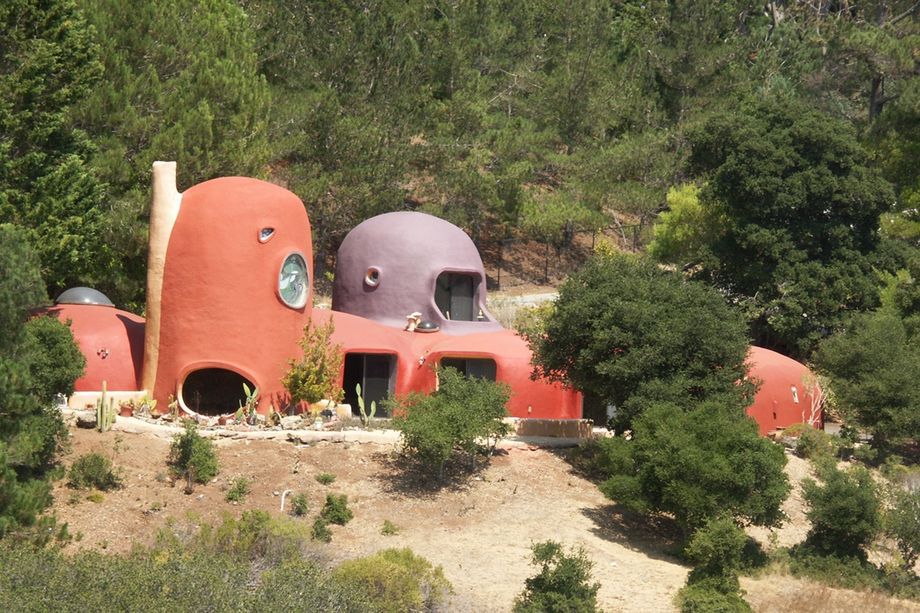 Readers adored the Hillsbrough Flinstone House this year; it holds a special place in the hearts of those who pass by it while driving the 280. However, the bulbous, salmon- and puce-colored pottery class project gone awry proved too much for our delicate sensibilities. Oof. But we did appreciate its intention; built in 1976, it was an experiment with new building materials. Et voilà. The unofficial Peninsula landmark sold in June for $2.8 million.